Kevin Gibbons was was born in Derby, England in 1984. In 2002, at the age of 18 Kevin started his bartending career. Kevin worked at a local cocktail bar and began his knowledge in bartending, mixology and flair. For years Kevin worked in restaurants, bars and nightclubs around England earning money to support my education in Sports Science and performing arts.

After graduating from Brunel college, Kevin wanted to take his stage career to the bar scene. In 2005, Kevin moved to Spain to work for one of the most famous bars across the Costa Blanca, Champagne Bar, where he expanded his knowledge on the bar, learned advanced methods and techniques in mixology, flair, and mastered the psychology of bartending.

In 2007 Kevin became the head Bartender of Champagne bar and developed his reputation for phenomenal service, management and created the most intense bar training that the Costa Blanca had ever seen. In 2010 Kevin was offered a position as managing partner at Elite Bartending School Miami and made his move to the star spangled banner. In 2012 Kevin published a Flair manual and DVD along side Austin Gagnon, the CEO of Elite Bartending School, which can now be purchased at one of the biggest online bar suppliers in the world, BarProducts.com.

Now well known for his crazy concoctions, Kevin wows his guests with great bottle tricks and satisfies them with fantastic mixology skills, across the world. Kevin has worked with companies such as Bacardi, Myers Rum and Absolute Vodka across the globe, traveling from places such as England, Spain, Canada, New York, Jamaica and even Antigua, demonstrating and educating people in product Knowledge, mixology and flair. In 2015 Kevin became the social media face of Malibu Rum filming commercials that received millions of likes, shares and comments. With over 19 years experience of working in and managing bars, creating cocktail menus, assisting in opening new locations, and teaching, Kevin now brings his education and global knowledge on mixology to Tampa, Florida.

Austin Gagnon started his bartending venture in Upstate New York in the spring of 2001. He was trained by a well-known bar owner in a local fast bar in Troy, New York. After completing two years of college and receiving an Associate Degree in Physical Education from HVCC, Austin decided to transfer and finish out his remaining years of college in beautiful Miami, Florida. While attending Barry University in Miami Shores, Austin put himself through college working in some of the most popular bars in South Florida including Bed, Club Deep, The Fifth, Revolution Live, The Social Lubricant in the Wynwood District in Miami, and the world famous Clevelander Hotel on Ocean Drive where he worked as a bartender for 7 years. Austin has also worked and is currently responsible for staffing many sporting events, concerts, and Venues such as bartender staffing for both the University of Miami and Miami Dolphins football teams, the Miami Marlins, the Miami Heat (2011, 2012,2013, 2014,2015) the world renowned Ultra Music Festival (2009, 2010, 2011, 2012, 2013, 2014,2015), South Beach Seafood Festival (2013,2014,2015) Miami Fine Chocolate and Food Show (2013,2014. 2015) Calle Ocho (2010,2011,2012), and NFL Tailgate parties for the Pro Bowl and Super Bowl. Austin graduated from Barry University in 2006, receiving a Bachelors of Science in Psychology. It was at this time that the idea of establishing an Elite Bartending School in a league of it’s own started to take shape. Austin wanted to share the knowledge, experiences, and skills that he learned in the bar business over the years with others. In 2009 Elite Bartending School’s first location opened in Miami Beach and fast became the #1 Bartending School in South Florida. Austin takes pride in providing his students with an exceptional education and learning experience to help them in their pursuit to become a successful bartender and excel in mixology and customer satisfaction.

Miranda Schmidt grew up in Niagara Falls, New York. After High School Miranda attended College and in 2011 received her Degree in Health and Wellness from Niagara Community College. Miranda quickly landed a job after college helping others in a nursing home as a Kitchen Supervisor. During this time Miranda also pursued her other lifelong passion of cheerleading and coaching, making the professional roster for the 2011-2012 Buffalo Jills Cheerleading Squad. After cheering for the Buffalo Bills for one season, Miranda decided to hang up her pom poms and head South to beautiful Miami Beach, Florida. Miranda’s love of health and wellness, cooking, and being around people quickly led her down the path to Hospitality. In late 2012 within days of moving to Miami Beach she attended Elite Bartending School, where she exceled in her new craft. Miranda thrived in the program, graduating top of her class, and as one of Elite Bartending Schools best students ever. Miranda quickly landing a high volume bartending job within days of graduating at the famous Automatic Slims. Miranda worked there for over a year, building up her skills and speed behind the bar. After mastering high volume, Miranda was curious to expand her knowledge on Mixology and customer service. Venturing out into the hospitality Mecca that is Miami Beach she fulfilled her next goal by getting hired at the Prestigious Living Room Lounge inside the W Hotel South Beach, serving craft cocktails to Miami’s Elite and Rich and Famous. During this time Miranda also picked up many events for Elite Bartending School, quickly becoming their head bartender for all major events in South Florida. Miranda continues to work many events all over South Florida staffed exclusively by Elite Bartending School, such as the world famous Ultra Music Festival (2014,2015) Fantasy Fest Key West (2014,2015) South Beach Seafood Festival (2014,2015) Cadillac Golf Championship at Triumph National Miami (2014,2015) to name a few. In 2014 Miranda joined the Elite Bartending School’s team of educators, and has since taught and prepared hundreds of todays students for the world of bartending. Miranda’s passion for education, teaching and her continued love of bartending stays with her students long after they come through the course. 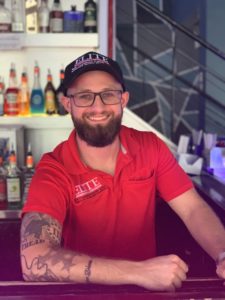 Ryan Zerites grew up in Greensboro, North Carolina. During high school, Ryan worked at a local restaurant as a server for 2 years enjoying the opportunity to engage and network with the public. As a result, he landed a job at a local credit union as a customer service representative for 2 years. Ryan decided to serve his country and joined the Marine Corps in the spring of 2014 graduating boot camp with the highest honors. During his time in the Marine Corps, he deployed to multiple countries including Spain, Italy and Lybia. Following the completion of his 4 year contract, Ryan was honorably discharged at the rank of Sergeant. After leaving the Marine Corps, he decided to start his new life in the beautiful state of Florida. Living on his own and not knowing anyone in Fort Myers, Ryan decided it was time for a change. He enrolled in Elite Bartending School and quickly learned the art of high-volume bartending and mixology. After graduating, he began his bartending career at The Indigo Room. During his time at the Indigo Room he worked shifts at The Dash Nightclub, Edge Nightclub and the 86 Room speakeasy making craft cocktails. In addition to these establishments, he also worked multiple events with Elite Event Staffing, including the South Beach Seafood Festival, St Patrick’s Day Block Party, Ring in the New Year event, as well as, private parties, corporate events and weddings in Miami and Fort Myers. Ryan learned his love for bartending and the service industry and decided it was time to take his career a step further. He contacted Elite Bartending School and went through Instructor Training with Austin Gagnon. After a few months, he started teaching full time at the Southwest Florida and Naples Locations. Ryan takes pride in providing his students with an exceptional education and learning experience to help them in their pursuit to become the most elite and successful bartenders in the service industry. 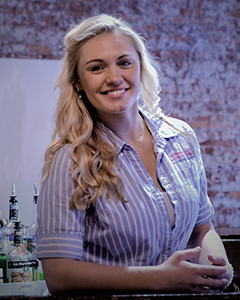 Sierra Gordon was born in Dallas Texas. Moving to Ft. Myers Florida she was immediately drawn to the thriving tourism and hospitality scene at a very young age. In 2007 she dove in, landing her first job in the craft at a local restaurant, where she was the youngest operation specialist in the company. This also sparked her 13-year career in the bar, club and food industry. While attending Florida Atlantic University in Boca Raton, majoring in Economics and Hospitality; she worked full time, adapting fine dining skills in the fast-paced industry. From black linen service in upscale restaurants like Villagio during the week, Sierra refined her expertise in bartending. She quickly expanded her knowledge specializing in wine and curating a passion for unique customer experiences. During the weekends, Sierra also worked at Mansion Nightclub on South Beach, Miami. At Mansion, Sierra got a taste of high-volume bartending. This would become her focus and new-found adoration. After leaving college, Sierra returned to Ft. Myers. She began to create a brand of her own. Using the knowledge and skills she learned while in South Florida, Sierra went to work for KRG, Kearns Restaurant Group. Here Sierra was rotated to their 5 different stores. Opening Izzy’s Downtown Fort Myers, with big hands on a craft cocktail menu; KRG’s first functioning craft cocktail bar. She helped out at The Boat House in Cape Coral, and mainly bartended at The Firestone Grill Room, Martini Bar & Skybar for 4 years. While working for KRG, Elite Bartending School moved into downtown Ft. Myers. She attended the school and joined Elite in 2014 to bartend events and polish her craft. Sierra toured the country working the nation’s largest food and music festivals from BottleRock in Napa Valley, to Ultra Music Fest in Miami and everything in between. Working so close with Elite, she realized her life’s next adventure would be spreading her wealth of knowledge, and skills accumulated over the last decade. Sierra left KRG in 2015 and pursued being an instructor for Elite. Sierra taught hundreds of students over the next five years. While teaching at Elite during the week, she’s filled her weekends working at Blue Martini in Naples, Florida. Today, Sierra is proud to expand Elite Bartending School and Event Staffing to a new city, Nashville Tennessee. Sierra looks forward to continuing her knowledge and passion to make a stellar impression on her students. 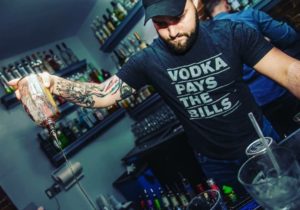 Allen was born in Rochester, New York, and raised in Southwest Florida. Allen did not always work in the Hospitality industry but had longing to be a part of the high speed and energy since a very young age. The slow and redundant lifestyle of retail in high school had Allen craving more. His first step in the door of the bar and nightclub industry was at the 2-story complex: Celsius Night Club, in the historic Downtown Fort Myers. High volume, fast paced, turn and burn atmosphere. It was the ultimate club he had dreamt to work at. When making in a night what he made in a week, Allen was hooked. With this new lifestyle, Allen wanted to learn more. After a year or so, Elite Bartending School and Event Staffing of Southwest Florida moved into the daytime vacancy of Celsius nightclub. Allen took the class to advance himself further in the scene. This led him to Land the country’s hottest gigs. Bartending at festivals and sporting events. From BottleRock in Napa Valley, to Middlelands in Houston, Tx… to Ultra Music Fest, and the 2019-2020 Super bowl in Miami, Florida, and everything in between. While traveling the country, sometimes multiple times a month, Allen picked up shifts at several other bars in his hometown casually. However, he stayed loyal to Celsius and continued to perfect his craft for the next 6 years. Allen is incredibly pleased to take on the next step of his career, introducing Elite Bartending School and Event Staffing to the beautiful and growing city of Nashville, Tennessee. Opening a franchise of his own, Allen is so excited to share, and share the knowledge and lessons from the bar and club industry he has learned over the years. Giving others the opportunities, he had himself.